The Top 10 Must Have Herbs

If it was up to us herbs we would live in herb paradise all year round. We love all herbs, great and small. The flavours, the smells and the nutrients that we get from herbs make them an irreplaceable part of our diet today. Herbs can transform the everyday meal into a special treat. The great thing about our renewed love for all things green is that our minds are curious and we are starting to really experiment with herb flavours.

List of the top 10 must have herbs for your kitchen

Here is why this list of herbs is extra special. Firstly, herbs pack a punch when it comes to flavouring our meals. They can help to cool things down, heat things up and balance our ingredients. Next, our list of herbs includes some native wild species that can be found close to home and we know that herbs also contain many essential vitamins and nutrients. We hope that you enjoy this herbtastic collection.

If you are in search for organic Irish herbs feel free to get in touch with us and we will connect you with the best herbal magic.

Yarrow Benefits and How to make Yarrow Tea?

White flower headed Yarrow, aka Achillea millefolium, is said to derive from the Greek hero Achilles, who had an affinity to Yarrow, after being shown its many uses by Chiron the Centaur, and used this herb to heal soldiers during the Trojan war.

This sweet scented health has a rich healing history from around the world. Renowned for its ability to heal and repair, its feathery leaves have been used since ancient times to heal cuts, wounds and burns.

It grows abundantly beside roadsides and paths. Foraging for yarrow is fun in summertime but be careful for lookalikes.

There is a good reason why this herb is known as a healing herb.

Yarrow is commonly used to help with issues like diarrhea and stomach issues. It is also used to help clear coughs, asthma, colds and liver disorders.

In manufacturing, yarrow is used as a cosmetic cleanser and in shampoos. The leaves and flowers are sometimes used in salads. 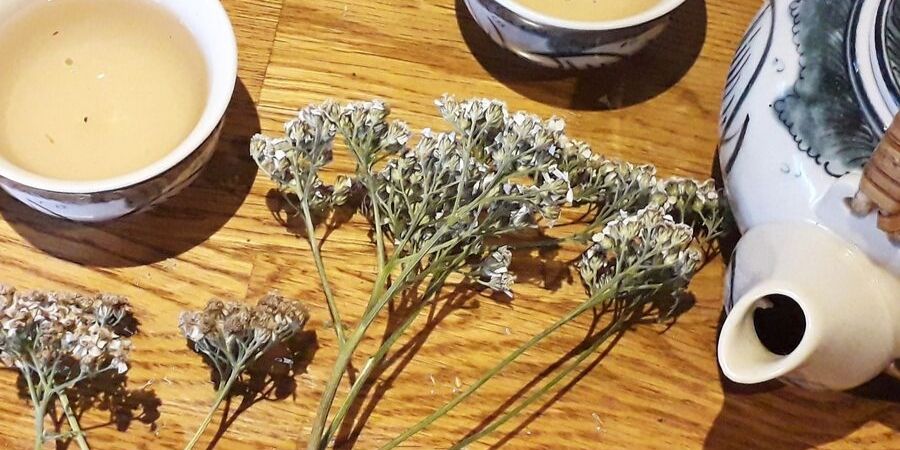 Three ways to use yarrow

How to make Delicious Yarrow Tea

For yarrow tea, simply put a 1-2 teaspoons of dried yarrow flowers in a tea pot, let it sit for 20 minutes, strain into a cup and enjoy a healthy tea.

If you want to treat yourself to a box of freshly dried yarrow you can get it in our Wild Store today.

Smudging is a custom that originated in the Americas. Indigenous tribes used the ritual of smudging to cleanse the air, banish negativity and bring positive energy into an area. It is also known as a Sacred smoke bowl blessing. Yes, you can use plants to drive away negativity.

We do not follow the indigenous tribes rituals but it does inspire us to create our own version of smudge sticks for individual use. If you have had a stressful day then a little bit of smudging will go a long way to creating a relaxing, peaceful environment.

How to make a homemade Smudge stick

Keep in mind that some herbs work well together and compliment each other. Lavender and Sage, Mint and Tarragon or Pine and Rose work well. At different times of the year there will be smudge stick ingredients available.

Be careful when lighting any herbs of plants indoors. Always keep a bowl of sand near the smudge stick. Never leave a smudge stick unattended. Don’t over smudge.

We hope that you enjoy using your smudge sticks. To join us on some wild herb foraging adventures please get in touch with a member of our travel team.

Stay up to date with the latest orchard news and travel tips for your next orchard adventure!